Welcome to the Experimental Quantum Optics Chair of Prof. Dr. Ch. Wunderlich at the University of Siegen.

Our experimental and theoretical work concentrates on the development and exploration of new schemes for quantum information processing using individual atoms and open fundamental questions related to quantum physics.

The joint research project MIQRO between the University of Siegen, Leibniz Universität Hannover , Heinrich-Heine-Universität Düsseldorf, QUARTIQ GmbH and eleQtron GmbH as an associated partner is funded by the BMBF and is scheduled to run for 4 years. The quantum computer developed and operated in this project will be scalable to a thousand quantum bits, paving the way for diverse industrial and academic applications beyond the capabilities of classical supercomputers. The MIQRO project will develop a breakthrough modular quantum computer built from quantum kernels that use stored atomic ions as quantum bits. The quantum logic operations performed in these quantum kernels – equipped with unprecedented functionality – are controlled by radio frequency (RF) waves. This is made possible by Magnetic Gradient Induced Coupling (MAGIC). The MAGIC concept is distinguished from other approaches by perfectly reproducible qubits, greatly reduced cooling requirements, and integrable high-frequency electronics for controlling qubits. Moreover, the simultaneous coupling of many qubits in a quantum kernel, while maintaining unrivaled small crosstalk between qubits, will accelerate quantum algorithms. Here, the MAGIC method will be extended to include new high-performance, microstructured trapped ion memories. This will enable high-fidelity quantum gates and quantum logic error correction, thus contributing significantly to the scaling of quantum computers. The quantum kernel developed and operated in this project, represents the core of a future ion-based universal quantum computer. This quantum computer will be scalable to a thousand qubits, paving the way for a wide variety of industrial and academic applications that are unthinkable today.

Within this joint project, the expertise of the participating partners will be put to optimal use. For example, at the University of Siegen, the conceptual basis for the implementation of quantum logic operations envisaged here, MAGIC, was developed and demonstrated. Together with the Institute of Quantum Optics at Leibniz Universität Hannover, headed by Prof. Dr. Christian Ospelkaus, the chips will be specified and developed, extending the proven MAGIC method with new high-performance, micro-structured ion processors. This will make LUH's innovative microfabrication processes and experience with the production of several generations of ion traps fruitful for the collaborative project. With experts in the field of quantum state measurement and reconstruction, Heinrich Heine University Düsseldorf, with Prof. Dr. Martin Kliesch as theory partner, is ideally placed to develop and implement the necessary characterization and verification methods. For the electronic control systems, MIQRO builds on the leading developments of QUARTIQ GmbH led by Dr. Robert Jördens, whose control software platforms ARTIQ and Sinara are already used by research groups worldwide to control quantum technologies and cover a broad requirement profile with industrial-grade components.

We congratulate Christian Piltz who was honoured for his PhD work by receiving the nationwide Quantum Future Award of the Federal Ministry of Education and Research!

Temporal correlations in quantum mechanics are the origin of several non-classical phenomena, but they depend on the dimension of the underlying quantumsystem. This allows one to use such correlations for the certification of a minimal Hilbert space dimension. Here we provide a theoretical proposal and an experimental implementation of a device-independent dimension test, using temporal correlations observed on a single trapped 171Yb+ ion. Our test goes beyond the prepare-and-measure scheme of previous approaches, demonstrating the advantage of genuine temporal correlations.

From September 16 to 21, 2019, the highlights of physics in Bonn focused on how current physics research succeeds in making the invisible visible. The heart of the science festival under the motto "Show yourself" was an interactive exhibition on Münsterplatz. At each of the approximately 40 exhibits, scientists from Bonn and all over Germany were available for questions, explanations and discussions.  With our contribution "Rechenkunst mit Quantentricks" we were able to show the basics of a quantum computer based on stored ions in a generally understandable way. The live demonstration of a functioning Paul trap, named after the former Bonn Professor Wolfgang Paul, invited to lively discussions on the topic of quantum computing. There were also science shows, live experiments, the Einstein Slam, a junior lab, workshops, a competition for schoolchildren, numerous lectures and lots of science to touch and try out.

The realization of a quantum computer requires interdisciplinary efforts in the field of basic research and engineering. That is why we organize a workshop in cooperation with Dr. Ing. Degenhardt from Forschungszentrum Jülich in the period from 23.04.19 to 26.04.19 in the Physikzentrum Bad Honnef.

Quantum computers, once available for widespread use, will revolutionize the ways we generate and use new knowledge – of fundamental scientific nature and for a wide range of applications. The quest for a scalable quantum computer is as of yet largely driven by experts in physics and in computer science. The challenges posed by this task, however, will necessarily require in addition dedicated and target-driven efforts in engineering. Vigorous innovative research and development in various fields of engineering will be pivotal for advancing successfully on the route towards a quantum computer, or quantum simulator, that is able of solving problems that, for all practical purposes, are intractable on classical computers. This workshop will bring together researchers already active at the forefront of this rapidly developing field, both from fundamental science and from engineering. It will put emphasis on implementations of quantum computing and quantum simulation using semiconductors, superconducting structures, and trapped atomic ions as physical systems. 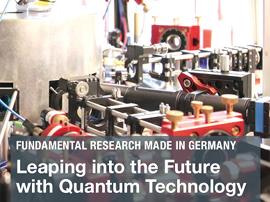 Leaping into the future with quantum technologies

The CEO of the IT security company secunet AG, Rainer Baumgart, visited our group for the recent issue of their customer magazine "secuview". Together with Prof. Christof Wunderlich (Siegen) and Prof. Dieter Meschede (Bonn) he discussed current developments and the state of the art of quantum technologies in the context of IT security.
Issue 1|2018 of "secuview" features an article about the visit and the discussions.

"Quantum technology is currently one of the hottest topics in science and technology. In particular, the development of quantum computers is the subject of much discussion, and if these innovative computers one day become very powerful, cryptography once more will have to reinvent itself from the ground up. With quantum computers (among many other applications) threatening cryptographic processes which are commonplace today, the aim of research into quantum communication is to develop new, highly secure encryption methods. What many people do not know is that cutting-edge research on quantum technologies is taking place in the heart of Germany. secuview visited two of the most influential scientists in this field – Professor Dieter Meschede and Professor Christof Wunderlich – who are conducting fundamental research with very different objectives." - secuview 1|2018 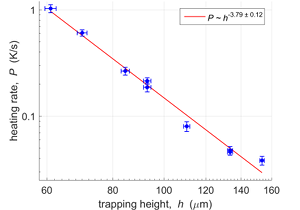 Investigation of the anomalous heating of trapped ions

A major obstacle in the way of miniaturisation of ion traps, desired for many aspects of trapped ion quantum information processing, is anomalous heating. This is heating of the ion's motion via electric field fluctuations of the trap electrodes. These fluctuations are orders of magnitude stronger than expected from Johnson noise. The reason for that is mostly associated with surface contamination/oxidation, however the actual mechanism behind this phenomenon is not understood so far, hence the heating is called "anomalous".
One of the ways to shed light onto the anomalous heating mechanism is the study of the ion's heating rate dependence on the ion-electrode distance.
We have built a unique planar ion trap with tuneable ion-surface separation and measured this dependence directly for the first time. Our measurements yield a dependence in reasonable agreement with a power law of exponent -4 that is predicted by some theories. 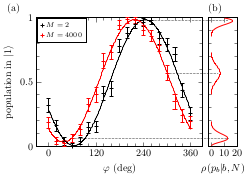 A promising scheme for scalable trapped-ion quantum simulators and processors rely on assembling a larger system from smaller modules between which quantum information is exchanged. This exchange can be realized by physical transport of the ions as carriers of quantum information between those modules. The transport operations have to be performed with high-fidelity to meet the requirements of efficient error correction that is needed for scalability.
We report for the first time physical transport of quantum information encoded into trapped ion qubits with a fidelity 99.9994%, that is, well above a commonly accepted error correction threshold.
In our experiment we embedded ion transport into Ramsey measurements and compared the results for different numbers of transport operations. During the measurements a single Ytterbium ion was transported up to 4000 times over a distance of 280 micrometer in a microstructured ion trap. 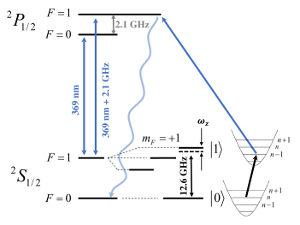 Laser cooling is a well-established technique in which the random motion or the temperature of neutral or charged atoms and molecules is reduced by dissipative optical radiation forces. Doppler cooling and sideband cooling methods are routinely used to cool these particles close to their vibrational ground state. This is often a prerequisite for experiments in quantum optics and quantum information science.
Recent years have witnessed the emergence of long-wavelength radiation in the radio frequency (RF) regime as an alternative for ground state cooling. We investigate RF sideband cooling in which RF radiation is applied to the bare ionic states of one and two trapped ions exposed to a static magnetic field gradient. Our method showcases experimental simplicity avoiding the necessity of any additional dressing field.   In addition, this cooling method is demonstrated at a low trap frequency that is often encountered also in neutral atom traps, thereby giving perspective to the application in ground state cooling of neutral atoms.
Furthermore, we demonstrate the first realization of sympathetic RF sideband cooling of a two ion crystal. A Doppler cooled ion (target ion) in the crystal is further cooled by applying RF sideband cooling on the second identical Doppler cooled ion (refrigerant ion). This complements the conventional sympathetic cooling using lasers. 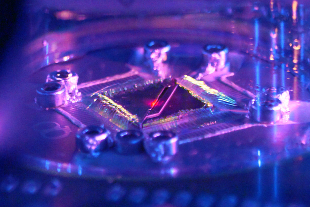 ARTE sciencemagazine Xenius visited our group for it's newest episode Die Quantenrevolution: Wie sie unsere digitale Welt verändert.
For their journalistic research on tap-proof communications, high performance computers, that outperform todays super-computers, and GPS systems accurate on the centimeter scale, the team asked itself "What is this new quantum technology and why the world-wide race for it's realization?".
To get answers the magazine visited the research groups of Prof. Rainer Blatt in Innsbruck, Prof. Anton Zeilinger in Wien and Prof. Christof Wunderlich in Siegen.
Prof. Christof Wunderlich explained clearly how a quantum computer is able to perform tremendous amounts of parallel computations by using qu(antum)bits instead of classical bits and presented our research regarding miniaturization and streamlining of quantum technology.
The (german) episode is airing on 08.09.2017, 16:50h on ARTE and will be available online.